When returning from their Belize vacation, guests of Lower Dover Field Station and Jungle Lodge are often caught showing an abundance of chicken photos to their friends. The routine look of embarrassment on a guest’s face after sharing photos with us is a bit of farm humor we have grown to love. It’s ok… we didn’t know what chicken sex looked like until we saw it with our own eyes either!

Free range chickens, turkeys, and ducks occupy another crucial branch of the bug patrol at Lower Dover Field Station.  Every day these patrolmen graze the 15 acre hotel area, scratching around for anything that moves. It works great for us and them!

Dan is the man when it comes to coaxing the hens to lay, and he is teaching us all the tricks he knows…such as painting Cohune nuts and placing them in the laying boxes in order to coax the hens into “sitting, staying, and laying.” 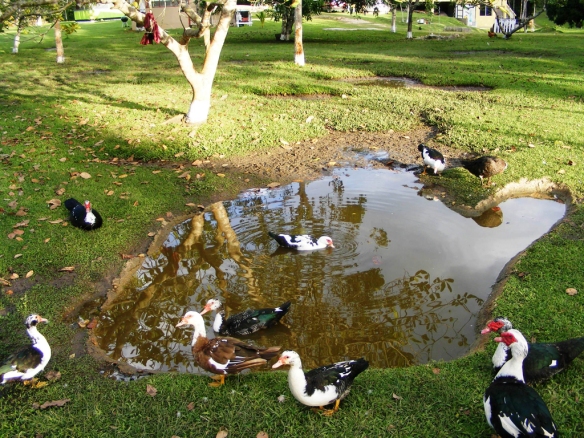 Duck Pond at Lower Dover in the shape of Wisconsin

The ducks produce the most babies per cycle, with 12+ ducklings per cycle. They love the natural drainage ponds that show up near the coop after a long stretch of jungle rain. The water sits on the surface because of the high clay present in the soils, but quickly drains into the creek in less than a few hours!  In order to trap water during the dry periods, we dug a small pond in the shape of Lower Dover’s favorite state, Wisconsin. Unfortunately for cheese heads, this pond never freezes for ice fishing.

We have had poor luck with raising turkeys, but we believe it was do to our old male turkey, first named “Tom” and later named “One-Eyed Jack” after a guest’s photo revealed his well hidden deficiency!  Its a wonder if his one eye worked at all…if you know what we mean.

So, Jack will be missed. He tasted truly wonderful smoked over a wood fire for turkey tostada dinner with our friend, and social media guru Eden Rudin of The Social Garden.

New male Turkey on the prowl.

We have a new stock of hens and a new man turkey. These new additions to the farm go along nicely with our brand new turkey roost built alongside the new sheep’s pen. Hopefully the larger lay boxes will be a success! More updates as newborns come along!

Bambu watching over the chicks.